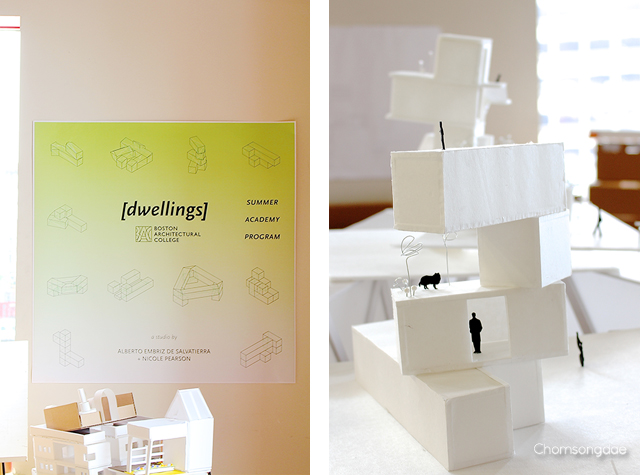 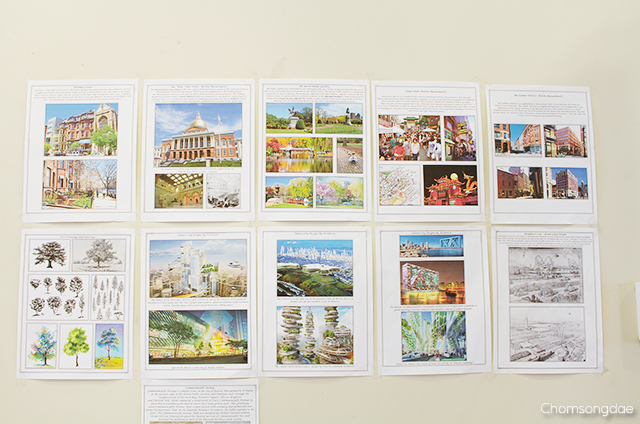 On July 30, I visited the Boston Architectural College (BAC) to see the Summer Academy Program for high school students. It was the last day of the program before the exhibition and students were busy putting their final touches to their projects. On the walls of the open studio were print-outs of the city of Boston and examples of architectural designs. I was curious to find out more about what students had learned and how much that had influenced they way they were designing their models.

As I walked into the studio with Rex Tzen (M.Arch I 2016 Candidate, Harvard Graduate School of Design), an instructor for the Summer Academy, I learned that each week in this four-week program, students were exposed to different elements of architecture. This last week, students were involved in a week-long studio including guerrilla (temporary) architecture and Spatial Poetry (where students were “introduced to the basic concepts of building systems and program at the urban infill scale”). 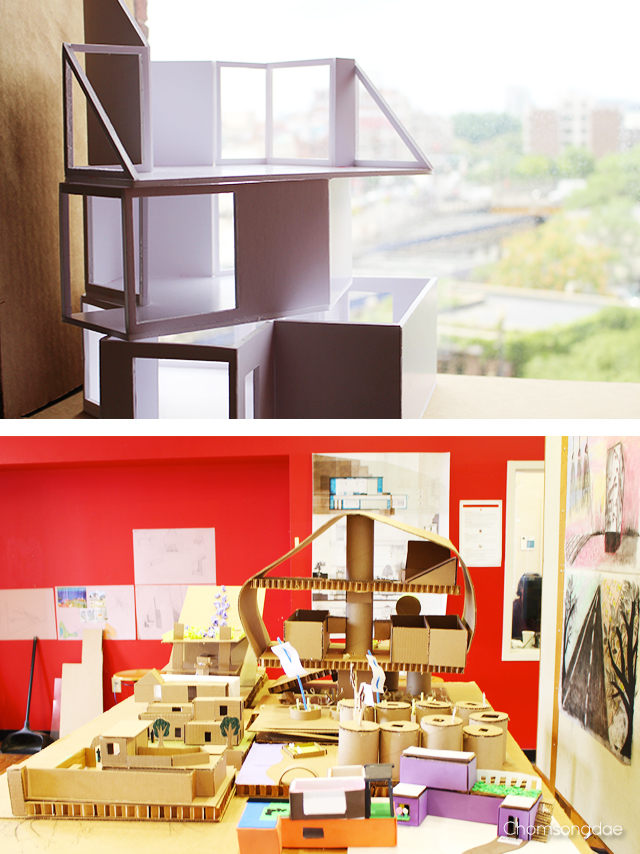 Leading up to this last week, instructors helped students to take a deep dive into architecture in multiple perspectives: documenting existing built environments and reimagining them, thinking about how to balance aesthetics versus purpose, and also thinking about architecture while keeping in mind the city, districts, and neighborhoods that they were designing for. 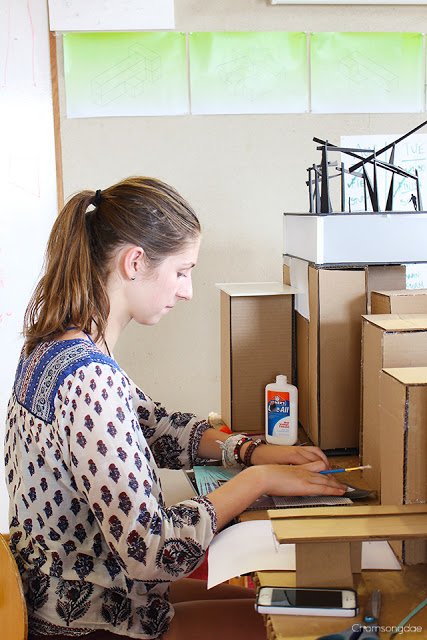 As I continued to walk and observe on my own, I noticed a flurry of activity in the room. Some students were gluing more material to their models, others conversing with instructors and co-students, and some filling out a feedback/comment form for the program. I talked with Emily Noonan who was working on a collage that goes with her structure. She explained that this week, she was part of the ‘Guerrilla Architecture’ studio, for which she was designing a temporary structure for public use. Students in this group were specifically looking at an empty lot near the BAC and thinking about designing something that could be quickly put together and taken down. Emily’s two main additions to the site were a colorful noise-canceling wall and a tent-like structure that blocks the sun. She wanted to create a space where people working in the vicinity could come and relax. A noise-canceling wall would block some of the noise coming from the highway nearby and the tent served to create a more intimate and cool space. 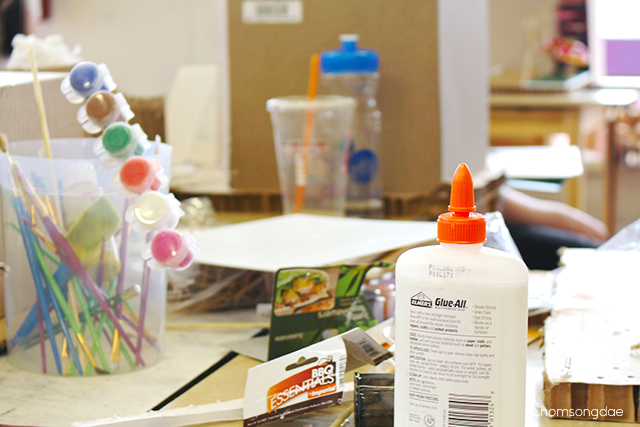 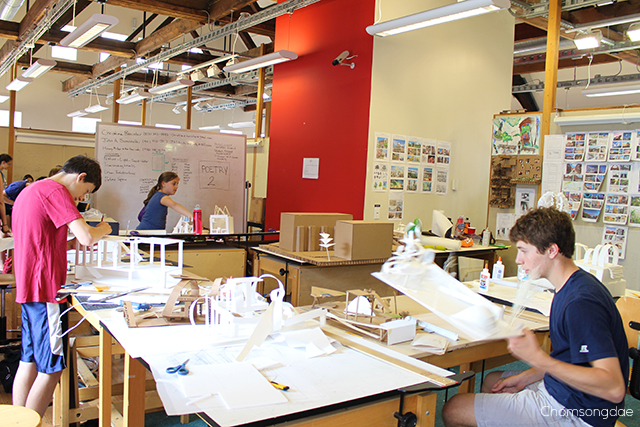 Soon after conversing with Emily, I joined the Spatial Poetry studio in time to hear Michael McCabe talk about his project entitled, ‘The Woven Path’. Students in this particular studio were working on an installation for an empty plot between two buildings near the BAC. Earlier in the week, they had visited the site before starting on their projects. Michael describes his project as “a basalt path woven through a block-like forest of bamboo punctuated by a cascading pond”. He wanted to create a space that was completely surrounded by bamboo so that you wouldn’t be able to see the cityscape if you were sitting on the bench lining the pond.

Michael’s model reminded me of the Korean word for ‘rest’. The word for ‘rest’ in Korean is ‘hew-shik’ (휴식) and it is derived from the Chinese characters (休息). The first character is a person (人) standing beside a tree (木) and the second character symbolizes when the heart (心) is alone (自). Hearing his presentation made me think that we need more spaces likes this in the urban sprawl where we can truly rest by resting beneath a tree and having a quiet moment for our own thoughts. As Rex commented in response to Michael’s presentation, this space was “simple, but not simplistic”. 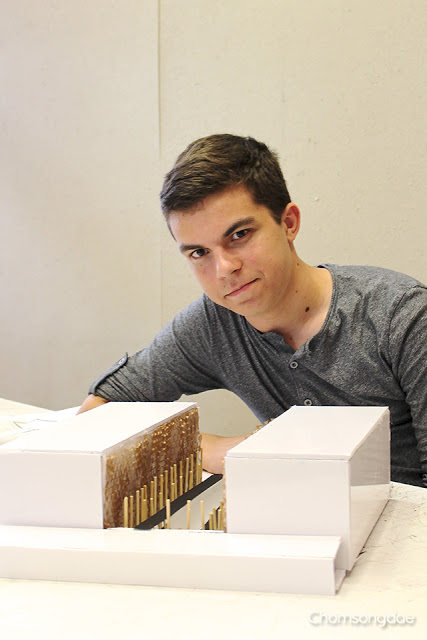 Michael McCabe, Sophomore at Commonwealth School with his work ‘The Woven Path’

I later returned to Emily’s group (Guerrilla Architecture) and listened in to students presenting their work. On the other side of the room was another group engaged in a collective reflection of their studio (Parks and Rec + build with bots). From the students’ presentations and instructors’ comments, even as an outsider, I could immediately see that each studio had a distinctive focus on particular themes and goals. Students seemed to have a great amount of freedom in creating their models, but they weren’t given unlimited options; it was not chaos. There were particular structures established by each studio that had been communicated to the students throughout the week and to varying degrees, students absorbed these rules and created their works within these boundaries. 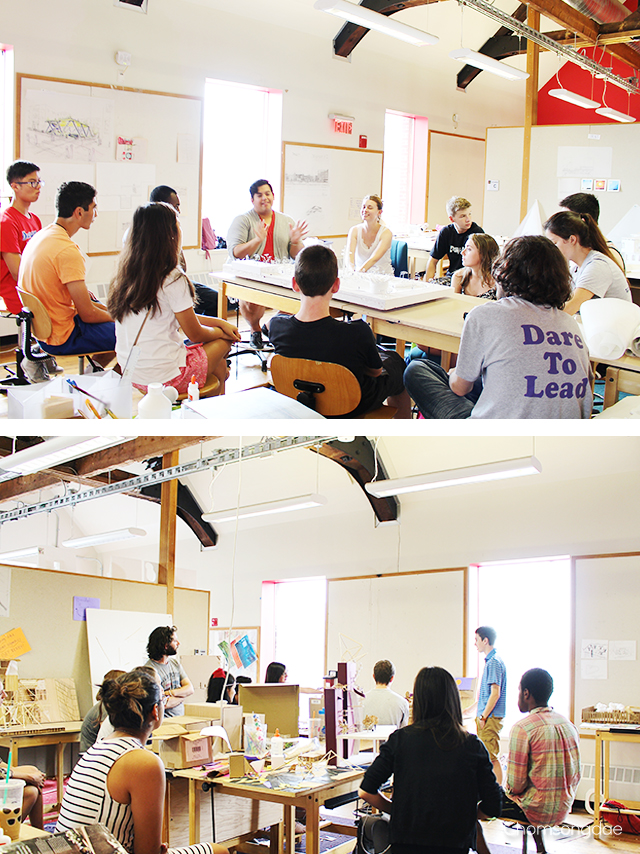 When instructors were giving feedback, they did not necessarily complement the models that were the most aesthetically pleasing or complicated to make. Instead, it was sometimes the simpler designs that were more reflective of the studio’s purpose that was praised. Of course, this doesn’t mean aesthetics was not discussed either. All in all, the presentations and feedback from instructors and students interwove aesthetics and purpose.

Today in education, there is a lot of discussion of how schools can help students to be more creative. Sir Ken Robinson’s TED Talk entitled ‘Do schools kill creativity’ continues to be the most watched video on the platform. Although in theory, more creativity seems like a good idea, it is not always easy to implement, especially for schools and education systems that have been operating for decades under a highly standardized model. Also, it is a rarity to find a school that purports to have achieved the right balance between standardization (rules) and creativity (freedom). Too much emphasis on standardization is criticized as backward and stress-inducing. On the other hand, a complete overhaul of the education system inherited from the industrial age for creativity’s sake can be chaotic or futile. At the end of the day, educators and policymakers do not seem to agree what exactly is meant by an appropriate balance between standardization and creativity, much less what is ‘good quality education’. Does the beauty lie in the eyes of the beholder? While we continue to ponder upon this century’ education problem, it would help to understand how creativity can be taught, since this has not been a forte for “traditional” schools. The BAC’s Summer Academy is an interesting case study and holds inherent value because it’s a really intriguing and fun program.

Recommend0 recommendationsPublished in Creativity, For Parents and Teachers, Teens