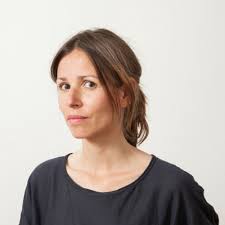 Rute Nieto Ferreira is an architect, urban designer, and author. She is the co-founder of small press children’s publisher Tower Block Books. She contributed a fun piece about the big letter hunt for the second Ottiya Magazine issue about play!

As you know, the theme for the second Ottiya Magazine is play! What does play mean to you?
Play means freedom, but also order. Another appealing thing is that there is no material interest in play.

What was your favorite way to play as a child (was it the big letter hunt)?
I grew up in an apartment so I enjoyed playing at my grandmother’s and great aunt’s gardens a lot. I seem to remember spending a lot of time setting up intricate worlds, sometimes domestic, sometimes for imaginary creatures.

I know that founding something isn’t easy! What made you make the decision to found your children’s publishing company, Tower Block Books?
The idea for The Big Letter Hunt book, which I developed with designer and photographer Amandine Alessandra, was the trigger. We wanted to publish that book, so we set up a structure that allowed us to do it.

How does your architectural background influence the way you think about parenting and education?
I don’t know if it does, consciously. But I’m sure that, like all carers, my interests gets in the way of my parenting. For example, I do take my children to see buildings, we’ll always explore a new place on foot, and they know they’ll find a sketch pad and pencils in my bag.

You’ve lived everywhere from Portugal, Sweden, and London. What made you settle down in San Francisco?
Will I ever settle down?

Do you have any suggestions for cool architectural sites our readers should check out in all the cities you’ve lived in?
In Portugal, I think beaches are the ultimate public and play space. In Stockholm I like Winterkiken and Rosendals Trädgård, both garden/ allotments, and Rum för Barn, a library and indoor play area in the beautiful Kulturehuset. There’s always something to do, discover and learn at a London park. And San Francisco has some pretty cool concrete slides that give you the best views of the city and are a fun alternative to walking down steep streets.