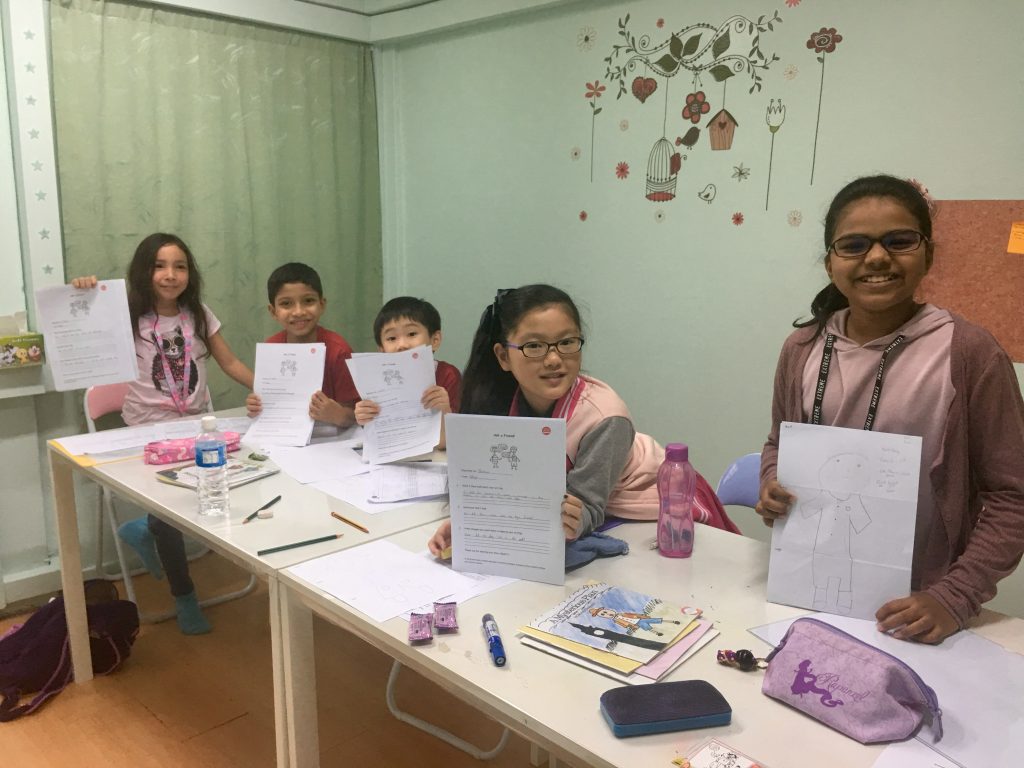 Writing, like any other art form, involves a certain degree of empathy; empathy for a created world and the characters living in that world. My role as an educator is to nurture that sense of empathy in the children I teach through storytelling and writing.

I run several programs in my academy that grooms young writers through the arts. One of our programs that I run in my academy biannually, I invite children who are between the ages of 6 to 12 to write a story about any subject that inspires and moves them. These stories are accompanied by illustrations.

For instance, one of our young authors recently wrote a battle story among monsters that is set in the virtual space of the internet. Another one wrote about a family’s journey to another planet to save a group of aliens. A number of them have also chosen to write about personified animal characters who undergo very human issues like bullying and facing failure.

In this intensive four-day program, participants go through these steps of planning, crafting, reviewing and finally producing a self-published children’s illustrated book.

The first draft of the story is written on a storyboard and is accompanied by sketches. During the first session of the Young Authors Programme, the participants “pitch” their stories to their classmates and their instructors.

They explain the plot of their story, introduce the characters and most importantly, convey the themes and the messages behind the story. By doing so, they acquire the skill of explaining the purpose of their stories and why their stories matter, not only to them but to their potential readers.

While a participant is pitching his or her story ideas, the other participants and the instructor practice active listening; they think of what they like or enjoy about the story, questions they have and also any suggestions to improve the story. These may revolve around the characterizations, the plot of the story or even the complication or problem.

In several of the peer feedback rounds, the participants would ask the presenter, “What are the feelings of the characters?”, prompting the presenter to dive deeper into the emotional landscape of the characters that they had created. In another example, the peers who are giving feedback would affirm the writers for the creative names of the characters or the plot twist at the end of the story. When the writers receive such encouragement and affirmation, they know that they are on the right track and others have identified and related to parts of their story.

In the Singaporean education system, children are not explicitly taught to ask questions. The emphasis has always been more on the pursuit of answers. Therefore, asking questions may not come naturally to children, but asking questions is indeed necessary for empathy. We ask questions to clarify and to better understand the writer’s shaping and crafting of the story.

As the instructor, I emphasize that writing is not always a solitary process and that getting feedback from peers is an integral part of the process. Through their peers’ questions and feedback, the writer is able to identify certain blind spots and narrative gaps that might not have otherwise been visible.

After receiving feedback from both the peers and the instructor, the young authors begin to empathize with the viewpoint of their target audience (both children their age and even adults).

The young authors are given the liberty to either accept the suggestions and feedback or not, as they work on their second draft.  However, most of them end up tweaking their stories and adding significant details. A few others also end up reworking major aspects of their stories in accordance with the feedback given to them.

When the young authors are preparing their illustrations, they envision what the characters look like, the mood and atmosphere of the setting and think of how to manifest important scenes as accurately as possible.

Oftentimes, this requires them to tap into their empathetic imagination by delving deeply into the world of the characters, their thoughts and motivations for their actions.

Mentorship by an illustrator and a published author

To sharpen their skills and abilities in empathetic storytelling, the young authors have the privilege of being mentored by a real-life published author and an illustrator. The author and the illustrator work with the children to enhance their existing narratives and illustrations. This adds another layer of feedback to the creative process.

Donating the proceeds to charity

When they are enrolled in the program, the participants are aware that they will be donating the profits from the sale of their books to a charity of their choice.

To aid the young authors in making this decision, I usually introduce them to a few different local and international charities, particularly those that serve the needs of children. Some of these charities include Make-A-Wish Foundation Singapore and World Vision.

The young authors come from relatively privileged backgrounds and such exposure to charitable organizations as well as the children who will benefit from their donations is an eye-opening experience for them.

I encourage the participants to do their own research (together with their parents) on these charities and others that catch their attention. The most important thing is for them to choose a charity that they feel connected to.

The young authors feel a sense of pride and fulfillment knowing that they are writing for a good cause. At such a young age, they know that their words are impacting a larger community and that their voices are being heard.

Inspiring other children to empathize

After the books have been published, they are made available for other children in the same age group to read in Artistic Strategies Academy. These young readers really enjoy and appreciate the books that their peers have written.

They are able to identify with the stories that are told and the characters that are moulded purely from the imagination of someone their age. It also instils in the readers a sense of hope and encouragement that they too, could perhaps publish a book in the near future.

By writing and illustrating their own children’s books, a whole cycle of empathy is set into motion. The empathetic imagination of the writer transcends to the reader, who in turn is able to write his or her own empathetic narratives.

I feel extremely privileged to bear witness to this incredible journey of the young writers as they transform into more confident writers who understand the power and impact of their words on the people and the world around them. It is my wish that they continue harnessing this power and their empathetic imagination for the good of others.

this article is part of the Ottiya Empathy Issue. Order a print copy here.