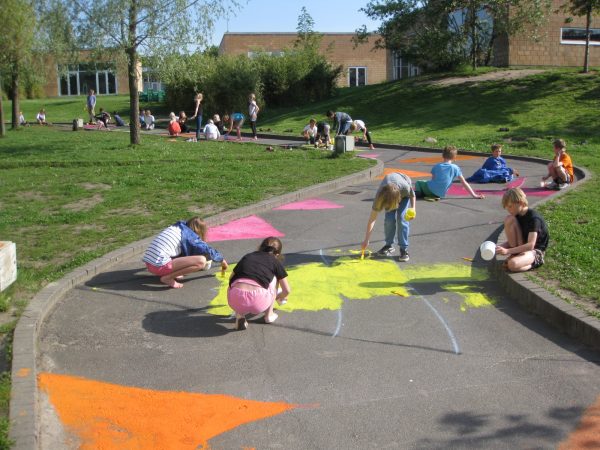 Kindness and Empathy in the Danish Folkeskole

Hello or “Hej!” as we say in Danish. We’re two girls named Laura and Mathilde, who are attending 9th grade in the Danish Folkeskole. In this article we would like to tell you a bit about how the danish folkeskole works. We will mainly focus on the school we’re attending, which is Trekronerskolen in Roskilde, but will include facts about the Danish Folkeskole in general. We hope you’ll like to read it!

The Danish Folkeskole is the municipal primary school in Denmark. It is mandatory and takes a period of 10 years to complete. It consists of a 1-year kindergarten class and nine years from 1st to 9th grade. There is, in addition, an optional 10th grade.

The word Folkeskole can be divided into two words, folk and skole. ‘Folks’ means people and ‘skole’ means school, you can translate it as ‘the school of the people.’ This actually describe it really well, in our opinion, since there are all types of children in the Danish Folkeskole.

If you look at how many hours we are spending in school each day as 9th graders, we’re in school around seven hours a day, but of course this number depends on what school you go to and what grade you’re in. When you read that, you will probably think that it is not much more than in many other countries, but our holiday breaks aren’t as long as in most other countries, therefore we have more school days. Our summer break, for example, is only about six weeks long, which we both think is very short and also when we talk about it with different students from around the world when we travel or through English class. Instead of having two big school breaks, like in many other countries, we have 5 small school vacations: Summer Holiday (6 weeks), Autumn break (1 week), Christmas Holiday (around 2 weeks), Winter break (1 week) and Easter Holiday (1 week).

Personally, it doesn’t really matter to us that we’re in school so much. Of course it would be nice with longer breaks or shorter school days, but it’s not something we particular long for because we have never tried anything else.

Kindness and empathy are values we learn about without really knowing it. We learn about it through play and talks.

The talks can be something like a thing we call class meeting. We have these class meetings in every grade, in most of the schools in Denmark. However, the younger students have it more often than the older ones do. In these class meetings, all students in the class sit together and discuss a certain topic. It can be everything from problems in the class to kindness. If a subject like this is taken up at the meeting, the students typically take turns saying what they think about kindness and what they think when they hear the word.

Other than class meetings and talks, we do special exercises, especially in the younger grades. An example of this is something we did when we were little, which was called “The Warm Seat”. In “The Warm Seat” each student takes turns sitting in a armchair and the rest of the class sits in a circle around the person in the warm seat. Then everyone went around saying something they appreciated or liked about the person.

By doing this, we learned how to respect each other’s values and realized that we were all special and that other people liked different things about us. By showing kindness towards each other, we were able to break the “wall” that is between us.

For about five years of schooling, we also had something called “playgroups.” The purpose of this was to get students to play with different pupils from the class. We were divided into small groups of four or five, and then we all took turns hosting playdates. Other than playdates at the different pupils homes, we also had to play with our group during school holidays sometimes.

When we became older and felt like we were too mature to play, the teachers changed it to something called dinner groups. So instead of playing together, we met to cook and eat dinner together while chatting with each other. When everyone in the group had hosted either a playdate or a dinner date, the teachers would make new groups so that we managed to be with as many pupils in the class as possible.

We both personally think these groups were a really great idea. This was part of what made the environment in the class so great because you got to get to know all of your classmates better.

Our favorite memory that relates to learning about kindness and empathy is “The Warm Seat”. This is because it made the environment in our class really friendly and open. We think that because we did this exercise back in 1st grade, our class has a really good cohesiveness and a comfortable atmosphere.

We really hope that you enjoyed reading our article just as much as we enjoyed writing it. We also hope that you feel like you know a little more about the Danish Folkeskole.

Recommend0 recommendationsPublished in For Parents and Teachers, Social-Emotional Learning