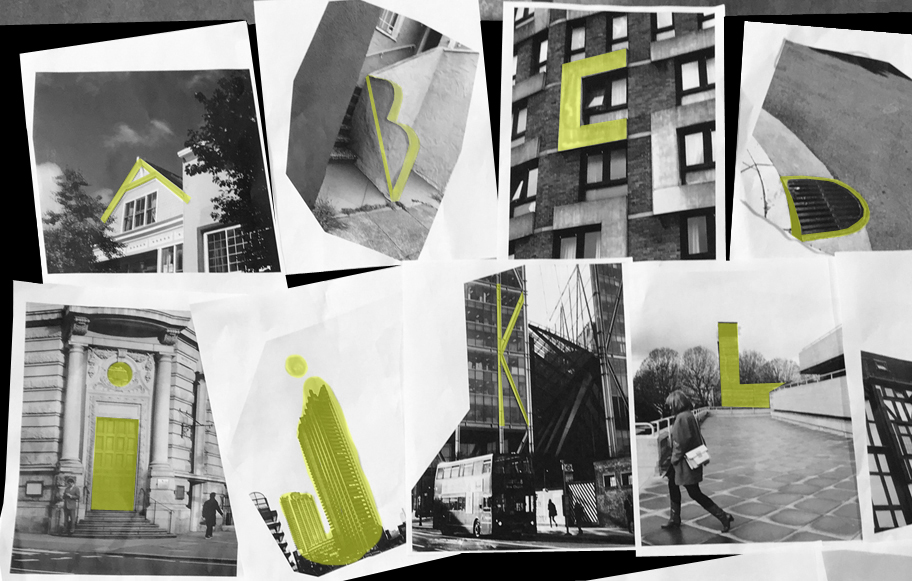 Two two-year-olds were being pushed to the park when one of them pointed up and said:

I looked to where she was pointing, and there it was – it was most certainly an M. It was made from the up-down-up-down of the gable ends of a Victorian brick warehouse on the Regent's Canal in East London, where we then lived. I could see an M, she could see an M, and so could her twin sister. We were all pretty excited about our find. So we started to hunt for other letterforms – what else could we spot? Soon enough we noticed an ‘O’ in a round window, and a narrowboat tiller bar was most definitely a ‘Z’. But at that point my daughters couldn’t yet recognize all the letters of the alphabet, so, occasionally, I took the liberty to play this game without them. In fact, after this first ‘M’, I couldn’t help not seeing letterforms in the architecture around me.

Nearly a year later I invited my friend, Amandine Alessandra, also a designer, to join in with this game. Letterforms were spotted (a little shiver of excitement when we found a good one), photographed, and lated plotted on a map. This game became a book – The Big Letter Hunt in the East End of London, and we shared the idea of this book and game with many children through workshops and class visits.

We realized in a classroom environment, like out in the city when we were playing this game with our own children, very little explanation was needed. In our experience, kids, especially those four, five and older, took to the activity straight away. “A, A, A there’s an A!” “Look, a K!” “I see a W!” They were excited to spot letterforms on large photographs projected on the wall or printouts, but also excited to point out other things about the place or building. With one group, we showed only local buildings: “Oh, that’s my building!” one child said. “I’ve been to that museum once”,  volunteered another. “Look, that’s where your cousin lives!” “Is that made out of wood?” It turned out letter-hunting was a good conversation starter too.

Make your own architectural alphabet

The most important thing about this activity is the pace: this is about ambling and taking time, not just to see but to perceive. This isn’t an activity which aims to teach children what each letter looks like; it’s about reflecting on the fact that letterforms, like all visual material, are signifiers; and there is a lot of fun to be had in decoding things (after all you are making visible something that is invisible to most people). 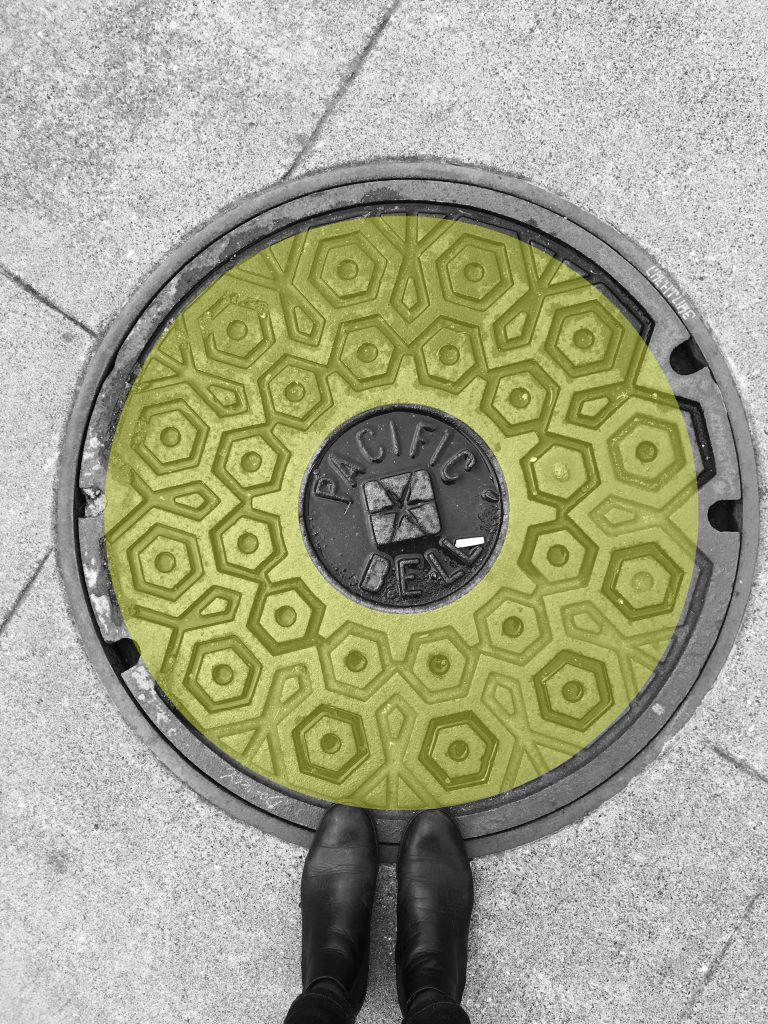 You’ll come across many O’s 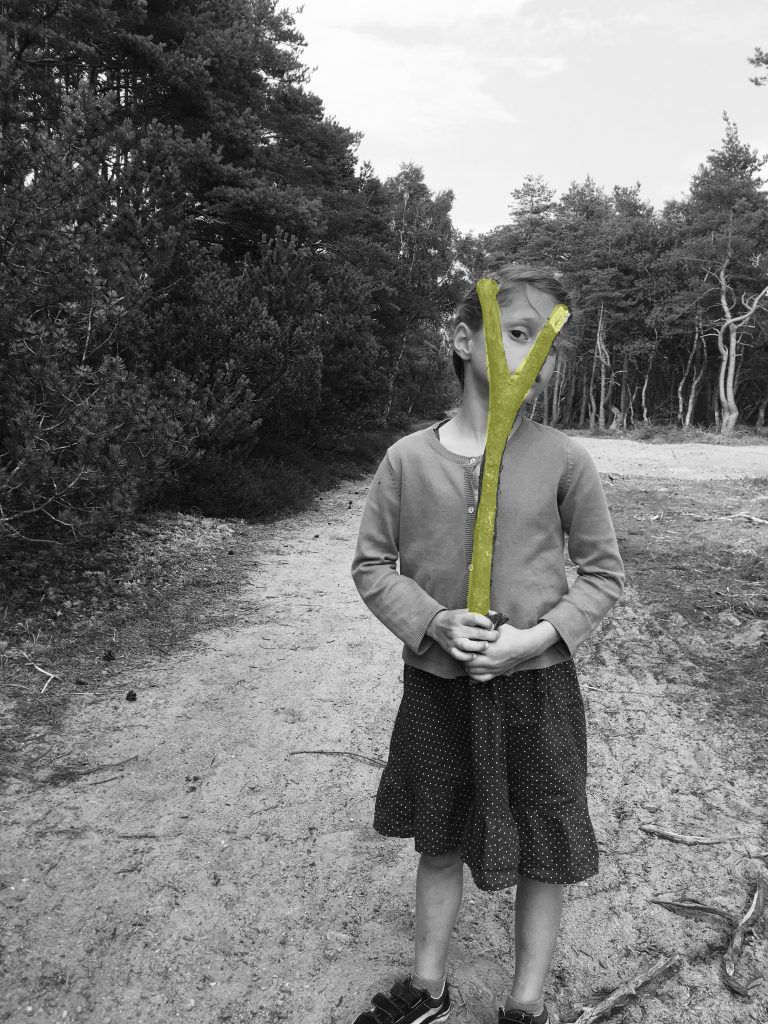 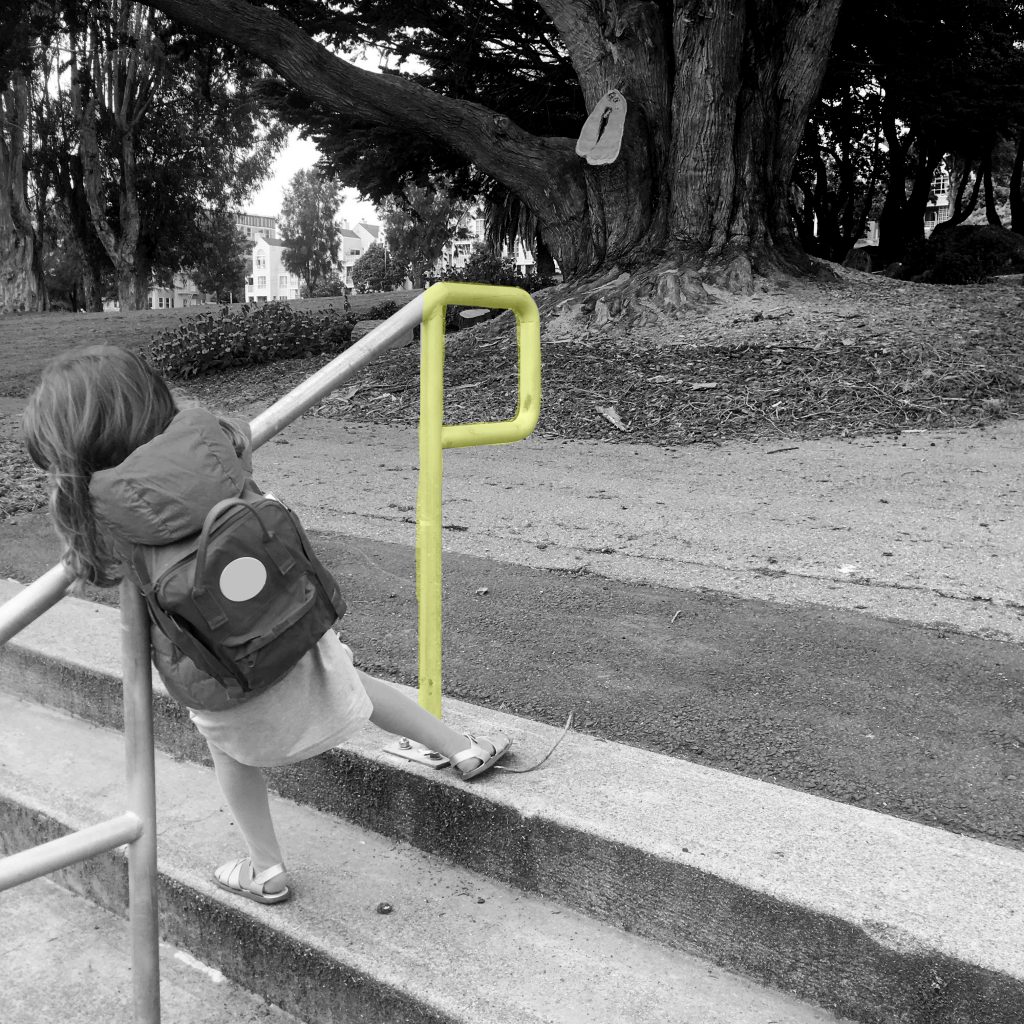 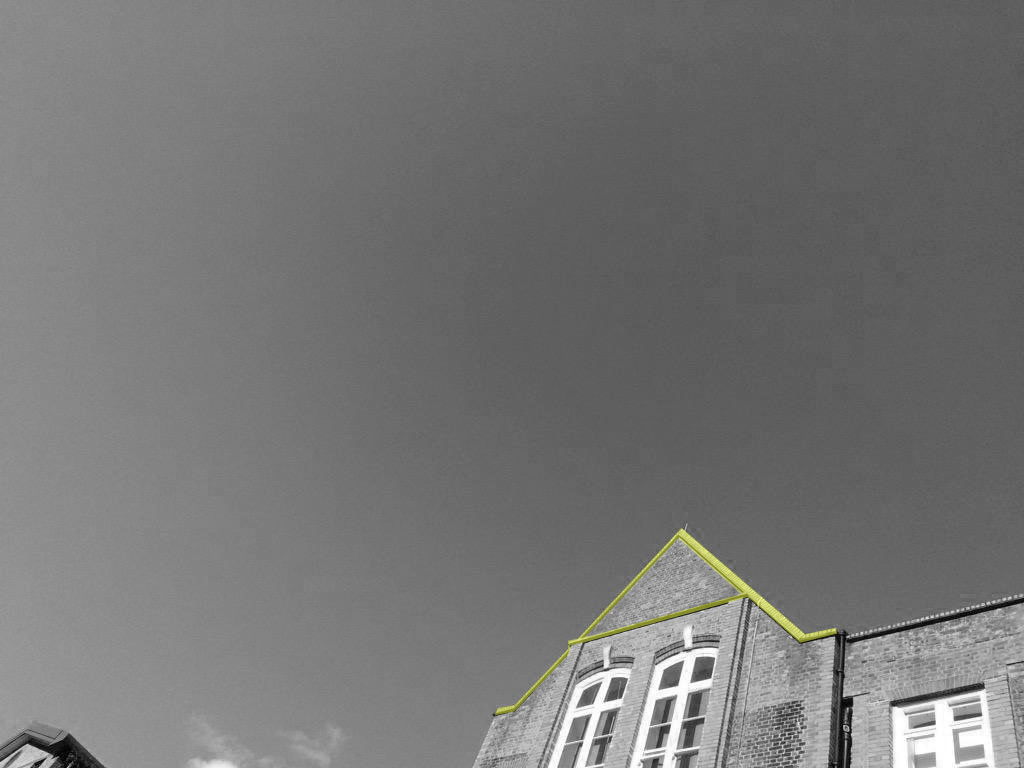 A serif ‘A’ spotted on Columbia Primary School in East London, United Kingdom

There are no rules as such, but I’ll leave you with some suggestions

Invite your friends and go out hunting for letters! They may be hiding on a building’s façade, in the space between structures (negative space), in tiny details or in the cityscape around you (a mosaic pattern, a bike rack, a bus stop). Accept that you will have a lot of certain letters and few or none of the others (Gs and Qs are notoriously hard to find). Don’t forget to look in parks and open spaces – trees branches make great shapes! 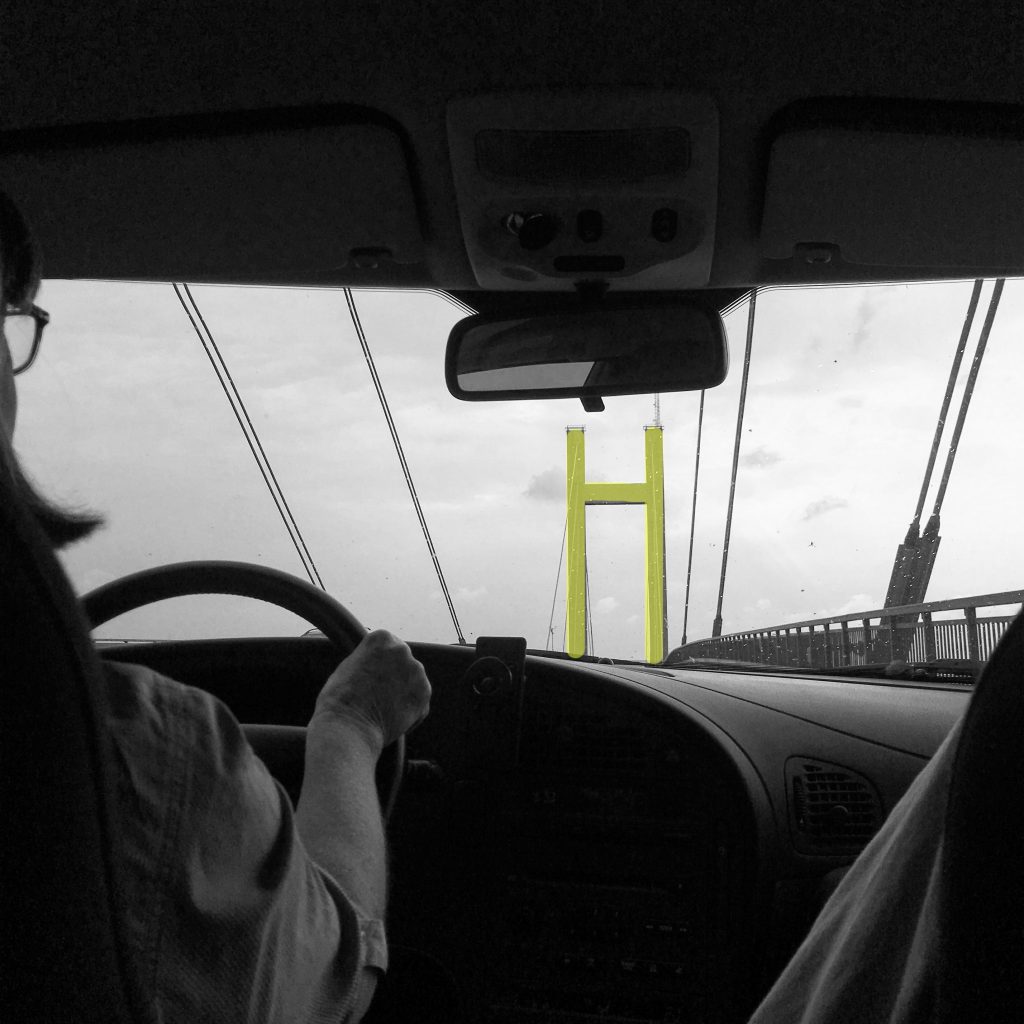 2. Let the kids hold the camera

This game is about walking, looking, taking it in and sharing what you’ve spotted with someone. Remember we are not looking for perfect letters, but make sure at least two people ‘see’ the letter. Decide on the best angle (where do you see the letter most clearly from?); focus on the form rather than the function – you don’t have to photograph the whole museum if what you are interested in is how its columns make an ‘H’) – and then snap.

3. Get those letter-buildings onto paper

The fun is in finding the letterforms, but it’s also in the editing process. Once you have a selection (if you’ve found seven As, you might need to let go of some) I would encourage you to print them in black and white on a home printer. Once your letter-buildings are on paper, you can cut the paper to frame each letter, if you like, and put your alphabet in order. At this point, you might realize there are some gaps in your alphabet, but that’s OK. 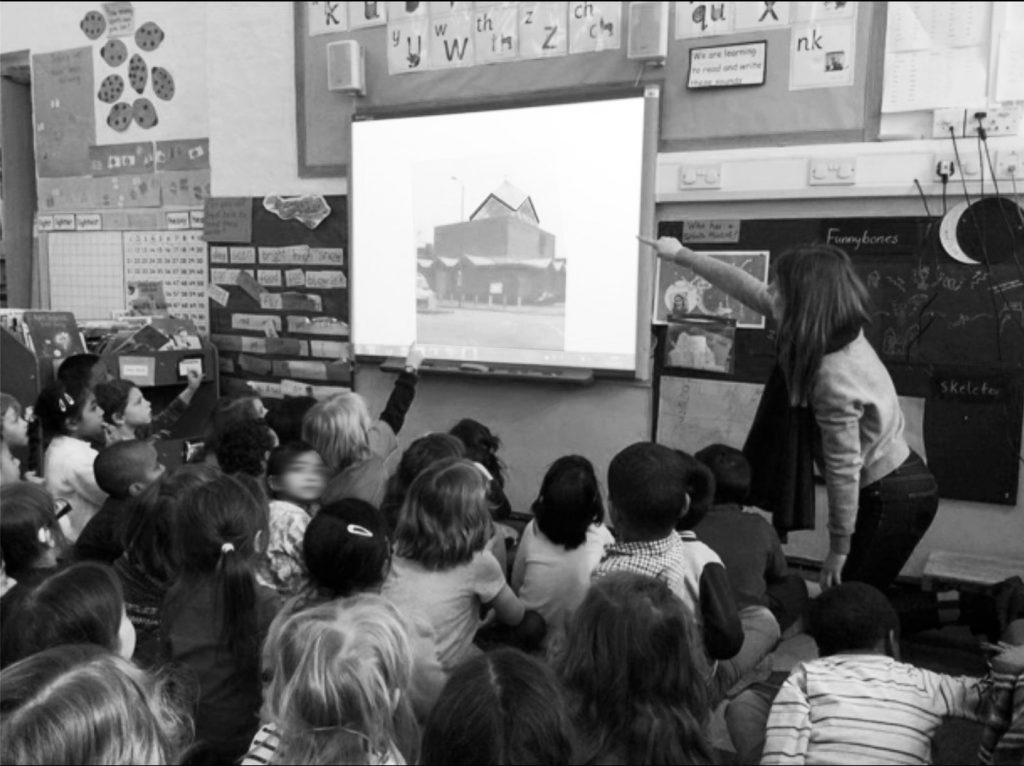 Trace your letters using your favorite fluorescent marker and stick them on the wall. You can build your architectural alphabet wall over time or go on a letter hunting walk and spot as many as you can in one go.

You might be doing this with your nieces and nephews, or with a class of 25 kids; so you might like to apply a different structure or a theme to make it work for you. For example, challenge the gang to complete a full alphabet during a vacation, or turn it into a project about your neighborhood, or give yourselves a time frame – why not make a 2018 A to Z?

Recommend0 recommendationsPublished in Ages 3-5, Ages 6-8, For Parents and Teachers, Play