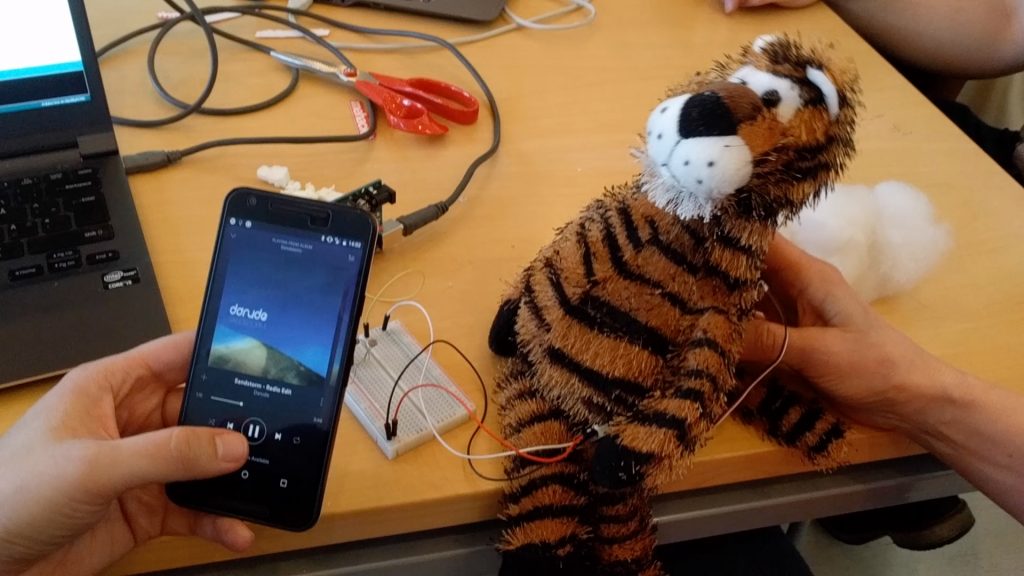 a classical toy-hacking project in a teacher-training. A microphone-sensor recognizes the sound and motors make the tiger dance to the music.

In 2014, programming had just become part of the national curriculum of elementary schools in Finland. There was a big discussion about the aims and implications of programming education: is it useful to understand programming if you’re not going to do it for work, and why is technology “taking over” our schools in general? I suppose similar discourse has surrounded programming education in many countries over the past few years. It’s often quite one-dimensional and seems to include a deep division between technology and human values. You’re either on the side of the technology or against it. One way to bridge this gap is more empathic technology education. From my point of view, teachers need empathy for the students and most of all for themselves.

Henrietta Kekäläinen and Otso Sorvettula formed Mehackit during the curriculum reform in 2014. Name of the company came from a sentence “Let Me Hack It” which describes the idea behind Mehackit quite well. The aim was to bring the maker culture into the classrooms and show the students that besides using technology, it’s possible to make meaningful things and art with it. Mehackit held dozens of 6-week high school courses about electronics and programming and visual art programming during the following year. Some of the high schools bought the courses themselves but others were made possible by a corporate sponsorship model. Projects created by students varied a lot: drawing robots, obstacle-avoiding cars or led-dices in electronics and programming, and games, generative art or nature sceneries in visual art programming.

The teachers of the courses were students from local universities. When I heard that Mehackit hired university students to teach programming courses in high schools I became inspired but was a bit nervous too. I had studied automation technology some years ago but changed to study educational sciences later. So it was many years since I had programmed anything and I wasn’t an expert in it by any means. I still made the decision to apply and suddenly I was teaching an Arduino-course in a high school in Helsinki.

During the course I had a funny experience: I felt that the fact I wasn’t an expert with technology actually sometimes made me a better teacher. Not being an expert made it possible to relate with the position of the students – their level of knowledge, feelings, concerns and hopes. I realized that at it’s best, technology education is about human beings exploring things together. And when it’s about making projects, there usually isn’t ready-made answers. I have never considered myself as a “technology-person” who has a natural ability to understand devices and make them obey my will. My attitude towards technology has always been quite practical – how can it make our life easier. And why should we leave technology education just for those who fit the traditional stereotype? 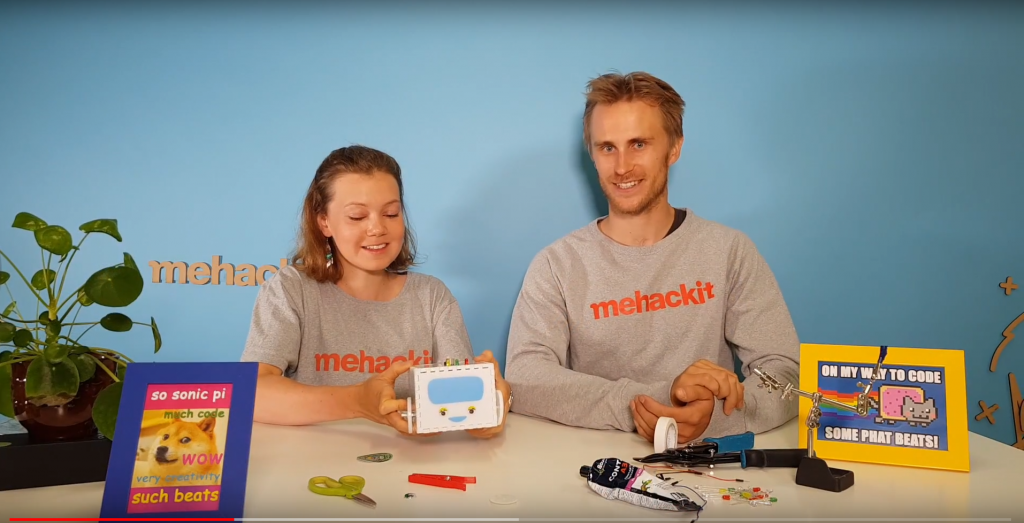 After the course I started developing learning materials for Mehackit. We also held dozens of teacher trainings about creative technology during the following year. When it comes to technology, there are of course many types of teachers. Some teachers have been teaching programming and ICT eagerly for many years before it became part of the national curriculum. They have developed their own learning materials and have a lot of knowledge that benefits the schools they work in. Then there are teachers who don’t care much about technology. They think it is irrelevant to their teaching. But the most common group of teachers in our trainings has been those who are curious about technology but have doubts about their ability with it.

I think there are some common thinking models that prevent teachers from taking the first steps.  One of these thoughts is that you should know everything before starting. As I said before, that’s not even possible. So what should you know then? I think that if you are teaching e.g. a visual programming course (we use an open source tool called Processing), you have to know the approximate limits of what’s possible. If a student wants to model a 3D apartment as first thing, you might need to suggest doing a 2D model of it first. There are moments when you can encourage and others when it’s good to set constructive limits

Some teachers may feel that even if it is possible to teach without knowing everything, it’s not reasonable. If we think about programmable electronics, for example, shouldn’t the teacher first carefully study the laws of electricity and computing that make everything else possible? Isn’t it impossible to apply or create with technology without knowing these laws? Expertise can be understood as a pyramid of knowledge like in the famous Bloom’s taxonomy. On the other hand, not understanding shouldn’t prevent us from trying, doing mistakes and learning from them. It’s possible to make snowballs without knowing the molecular structure of snow and it’s possible to make with technology without understanding the ones and zeros on the fundamental level. You’ll face the important questions on the way and learn as you go.

Other misconception is that technology education would be just about technical details. I think a key skill a good teacher needs is the ability to listen. What is it that the students really don’t understand and even more importantly, what this technology means to them? How could they connect the project to their hobbies? The technical complexity doesn’t have to be a value in itself. Sometimes a creative idea is the thing that takes the project to a new level and boosts the motivation of the student. And it’s easier to tolerate frustration with technology when you have a meaningful goal you want to achieve.

Another great obstacle is the feeling of being alone. I’m not denying that the teacher is sometimes alone in the classroom but on the other hand there’s the web-community, other teachers – and of course the students – who can help. We’ve been piloting our new service Mehackit Atelier with teachers since last fall. The idea is to provide virtual classroom with world-class online-materials and educator support. An important promise during the testing has been that were available on phone 24/7. Quite few teachers have actually called us during the testing but the feeling of not being alone has made it possible to take the first steps.

So: 1. You don’t have to know everything, 2. Lack of knowledge shouldn’t prevent you from trying, 3. Being able to discuss and listen is crucial, and 4. You are not alone. I think these ideas are summed up in empathy quite well. We should widen our definition of a technology-person to those who don’t understand technology but are curious and would like to do something creative with it. It requires empathy to allow ourselves to make mistakes and really help each other with technology. After all, it’s not humans or technology, it’s humans making things with technology.