Mitch Resnick is the Director of the Lifelong Kindergarten group at the MIT Media Lab and the LEGO Papert Professor of Learning Research. His research group created Scratch, a visual coding platform and online community for children with over 20 million users and is translated into 70+ languages. He is a leading practitioner and thinker in the space of creative learning and constructivist pedagogical approaches in learning technologies. In the following interview, I asked him about his thoughts on creativity, play, and his career trajectory. 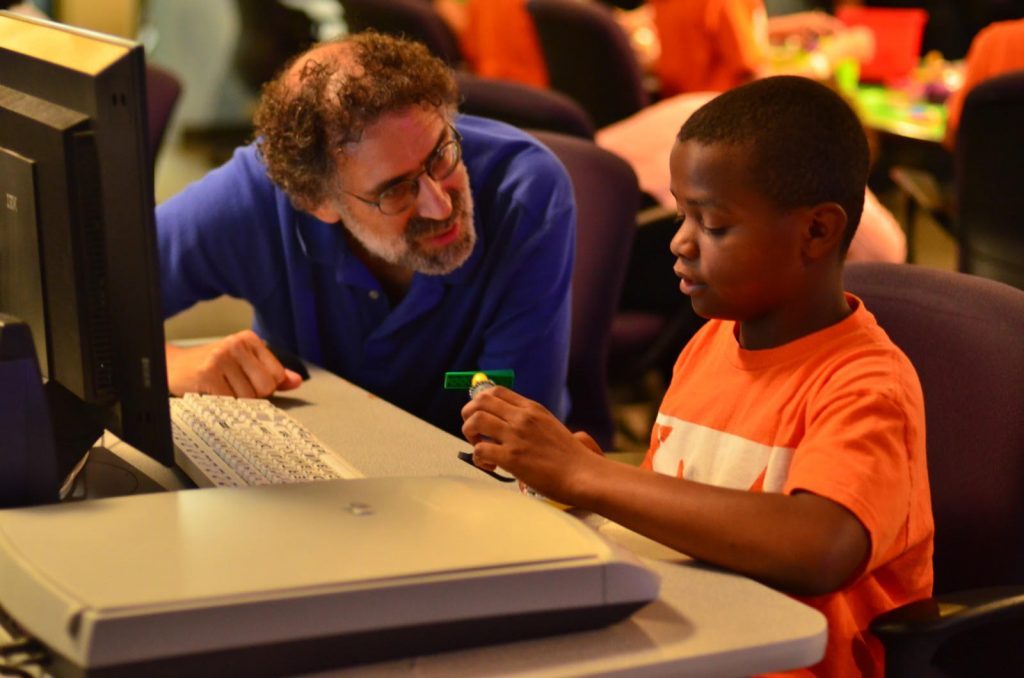 Mitch working with a student

R: Could you give a brief overview of your ideas on creative learning?

M: We live in a world that is changing more rapidly than ever before and today’s children will enter a never-ending stream of unpredictable situations in their lives ahead of them. To be able to thrive in a fast-changing world, the ability to think and act creatively will become more important than ever before. At the Lifelong Kindergarten group, we develop new tools, activities, and strategies to help young people to develop as creative thinkers. A big part of this work is giving children the opportunity to create things–create is at the root of creative thinking. As people create things, there is a constant back and forth between the processes of creating things, developing new ideas, and growing as a creative thinker.

R: You suggest that there are four P’s of creative learning, which include projects passion, peers, and play. Can you briefly talk about what those four P’s are?

Work on these projects should be done in communities of learners where people are sharing with one another. Too often when people think about thinking, they imagine Rodin’s sculpture of a thinker sitting there by himself in contemplation. Although solo thinking might be useful in some situations, we know that the most important learning happens in collaboration with other people–when we learn with and from our peers. So we want to make sure to provide learners with opportunities to work with others, to share with others, and to build on the work of others.

The final key component of creative learning is play. By play, I don’t just mean laughing and having a good time, but as an attitude and approach to dealing with the world. When you play, you are constantly experimenting, taking risks, trying new things, and testing boundaries. Having a playful attitude means that you’re willing to try new things and experiment and the most creative things happen when you have that type of playful attitude. 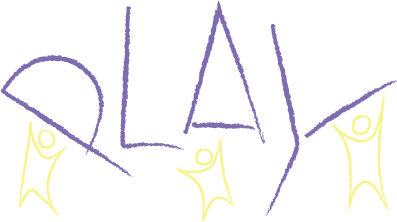 R: Previously, you said that you think that play is the most misunderstood of the 4 P’s of creative learning. Why is that?

M: People tend to associate play with a particular set of activities or just in terms of having fun. However, I think about play differently. I often refer to an analogy used by my colleague Marina Bers (a professor in the Eliot-Pearson Department of Child Study and Human Development at Tufts University). She compares playpens with playgrounds, which are both spaces for play. But, a playpen offers much more limited opportunities–children in playpens have a limited set of options and limited space to explore. On the other hand, in playgrounds, there’s a greater range of options and greater opportunities for interacting with others. If you watch children in playgrounds, you’ll notice them coming up with their own activities and own approaches to play. So, I want to support more playground styles of play where children are constantly inventing new approaches and trying to new things in collaboration with one another.

R: Why is tinkering important in play?

M: I see tinkering as the intersection of play and making. Tinkering is when you’re making things with a playful spirit–when you’re making things by experimenting, constantly iterating, and revising what you’ve done based on your experiences. Unfortunately, tinkering does not get much respect in educational systems because tinkering is not seen as very efficient. Oftentimes schools encourage children to plan, to come up with a problem-solving strategy, and to execute the strategy. However, in reality, it’s not easy to develop a plan until you have experimented with different strategies. Also, your plans and even goals might evolve over time.

Although planning can be very useful in some situations, we also need to provide spaces for children to tinker, experiment, explore, try new things, and continue to revise. We want to make sure that we provide children with opportunities to tinker with the world around them. We take that very seriously in the technologies we develop. In my research group, we try to develop what we call “tinkerable technologies”. So this is not technology just to help you efficiently get you to a solution, but technologies that allow you to experiment and to explore. 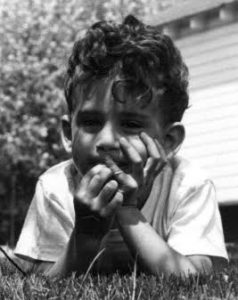 Mitch outside the place where he grew up

R: Did you have opportunities to tinker when you were growing up?

M: I was very fortunate to have had a lot of opportunities to tinker. Growing up, I enjoyed playing games and playing sports, often with my brother or my cousin. But even more than playing games, I enjoyed making up games and creating games. One summer, I built a miniature golf course in the yard next to my house. Fortunately, my parents were tolerant of my explorations, allowing me to dig up the backyard. They were open to my tinkering.

R: Were you also encouraged to have that kind of similar playful attitude at school?

M: I think more of those types of experience I had were outside of school rather than inside of school. Of course, there were some opportunities in school where I got the chance to do more experimenting and trying new things. In elementary school, I remember that I enjoyed playing sports and I got to work on a report of the history of the Summer Olympics and that was an example of me working on things I really cared about. So there were some opportunities to work on projects that I really did care about.

However, I also had some negative experiences at school. When I was in fourth grade, every Friday we would have a spelling test and then the next Monday we would come back to school and get back the grade on our spelling test, and we would rearrange our desks in the room so that the first row had all the people who had the highest scores on the test and the last row had all the people with the lowest score on the test. The teacher probably felt that this type of competition would motivate students to work harder to become better spellers. However, I think that it was very demotivating for the people who were in the last row. Maybe they were talented in other ways, but because of a spelling test, they were made to feel inferior by being seated in the last row. On the other hand, the students in the first row ended up focusing on the wrong things. Getting high scores on the spelling test became what school, learning, and life was about. They became focused on getting a good score on the test, as opposed to becoming a good learner. 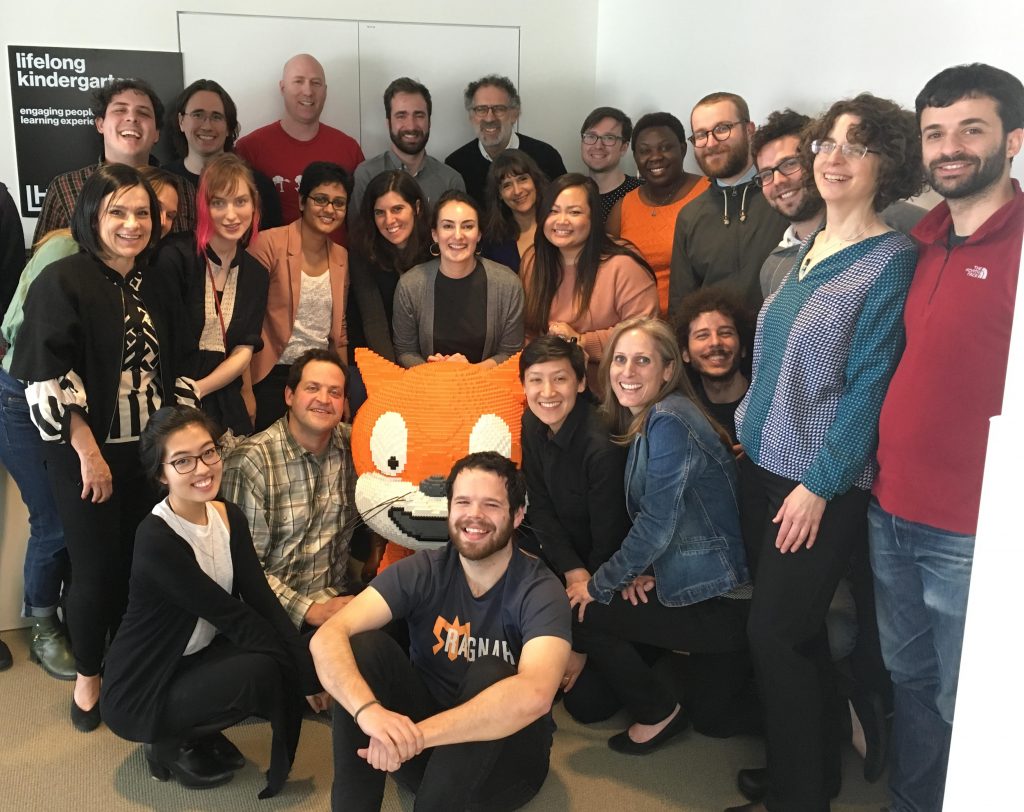 R: How did you navigate from those negative and competition-driven K-12 experiences to a place like the MIT Media Lab, which is in many ways the total opposite of that kind of education?

M: I went to a very good university where I majored in physics and got good grades. Then, I got accepted into some of the best graduate schools. However, it suddenly occurred to me that that was not what I was most excited about. I felt like I followed a certain path through school because I worked hard and was able to get into a good school–but that was not necessarily what I wanted to do. I started to reflect on what it was that I really wanted to do and what I would find the most rewarding for myself.

I also started questioning the school system and became concerned about other students. I had the set of skills and approaches that helped me to do well in school, but I started to see that many people were very talented at many different things, but were not doing well in school. I felt like school was not doing a very good job of supporting them so I became more and more interested in how I could help support children as they were growing up to follow their own path and reach their full potential.

Another very important moment was when I met Seymour Papert who later became my mentor. I met him back in 1982, when I was living in San Francisco. After college, when I didn’t go to graduate school, I worked as a journalist for a few years writing about science and technology. I went to a conference about personal computers and Seymour was the keynote speaker and I was inspired by his talk. At the time, most people thought about computers as tools simply for delivering instruction or delivering information. But, Seymour had a much more humanistic approach and thought that computers should be used as a tool to allow children to explore, experiment, and express themselves. To me, that felt like a great approach to help children to reach their full potential and to grow up as creative thinkers and to develop a love of learning. Through Seymour, I began to see computers in a new way, education in a new way, and children in a new way.

So, I worked with Seymour as a graduate student at MIT and I continued to work with him afterward. Sadly, Seymour passed away last year, but I’ve been fortunate to have been inspired by him to carry on his work. I see a lot of my work is to carry out Seymour’s dreams to allow children everywhere, from all backgrounds, to be able to follow their own interests, to explore their own ideas, and to develop their own voices by using technology.

R: Are there any last words you might have for educators and parents from all over the world who are reading this interview?

M: This goal of helping children to develop as creative thinkers is a big challenge with many obstacles in the way. So, it’s going to take a big effort from many of us. Whether you’re a parent, educator, school administrator, policymaker, or researcher, I think that everybody is going to have to help provide children from all backgrounds with new opportunities to work on projects based on their passions in collaboration with peers in a playful spirit. I think there’s nothing more important than helping young children to develop as creative thinkers so that they can become full and active contributors to today’s society.  I am really hoping that people from all backgrounds can join together to bring that idea into reality.

Recommend0 recommendationsPublished in Coding & STEAM, For Parents and Teachers